A 6-foot-6 forward with a 6-foot-9 wingspan, Okoro has size, strength, athleticism, and intangibles to succeed at the next level.  In his lone season at Auburn, he made a name for himself mainly due to his play on the defensive end.  He can effectively defend positions 1-4, and was often asked to defend at the point of attack.  He displays exceptional lateral quickness, and proved capable of staying with speedy guards, such as Alabama’s Kira Lewis.  Drivers or cutters had a tough time getting separation from him without the aid of screens, and he switched seamlessly when that approach was called for.  The freshman also proved to be an alert and active team defender, who was especially effective stopping fast breaks.  He typically was one of the first players to get back on defense, and displayed great timing for cutting off penetration on the break.  Okoro’s main area for improvement is being more aware of screens; he can be so focused on his man that he can be totally surprised (and thwarted) by picks.  Improved court awareness would likely help him boost his modest steal numbers (0.93 per game) as well.

Statistically on defense this past season, Okoro ranked at 72nd percentile for points-per-possession (PPP) allowed, and was at least average in all subcategories except vs. pick-and-roll handlers (25th percentile), when he had trouble stopping drivers coming off screens and going to the basket.  In terms of steals and blocks, he produced a combined 2.31 per 40 minutes, which was slightly above average.  It is a bit surprising that he was not more effective producing defensive plays, but a lack of a huge wingspan likely contributed to that fact.

Okoro was not a primary offensive option as a freshman, though you can easily imagine him flourishing if he’d stayed in college for another season.  Overall for PPP, he was a very efficient scorer (86th percentile).  Nearly half of his offense came from spot-up plays (28%, 55th percentile) and transition possessions (20%, 79th percentile).  Most of his success via spot-ups came from drives to the rim, and he was effective around the basket in general, making 60.2 of all his half-court shots within seven feet (74 of 123).  A quick first step helped him be highly effective as a driver in the half court (FG% of 61.7), and he was very tough to stop in the paint; he can power through contact and/or finish well above the rim.  Contact rarely bothers him, and the Auburn product can finish very effectively with either hand.  At this point, he is mostly a straight-line driver, who relies on a good burst, but he occasionally flashes some impressive moves.  Though his attempts were limited, he excelled as an isolation scorer this season, ranking at the 97th percentile for PPP.

Okoro struggled from the outside this season, but the 19-year-old’s shooting stroke appears fairly sound.  He was poor on the catch-and-shoot attempts this season (18th percentile), and had less-than-ideal percentages from both the three-point and free-throw lines.  He didn’t take many jumpers off the bounce (62nd percentile), but looked smooth with side-step and step-back moves.  The Georgia native definitely knows his limitations, and doesn’t take bad shots.  He also shows potential as a passer, displaying good vision and the ability to make difficult passes.  He even demonstrated promise as a pick-and-roll handler, ranking at 70th percentile for PPP, including the results of passes.

I believe that Okoro has an outside chance to be the top pick in the 2020 NBA Draft based on his size, strength, athleticism, and all-around potential.  At a minimum, he will be a lottery pick.  He doesn’t have great length, but he is otherwise a prototypical prospect for the modern NBA.  His poor numbers as a jump shooter are a concern, but I believe his shot is fixable.  Another concern is that his overall productivity was average for a prospect, but as noted above, I can also imagine that improving with experience.  In terms of comparisons, the Wizards’ Troy Brown Jr., the 15th overall pick of 2018 draft, comes first to mind.  At Oregon, Brown struggled as an offensive player, but displayed great athleticism and defensive skill.  This summer, the Washington wing started to blossom, averaging 15.3 points, 7.3 rebounds, and 4.5 assists per game in the “Bubble” during the restart of the NBA season. 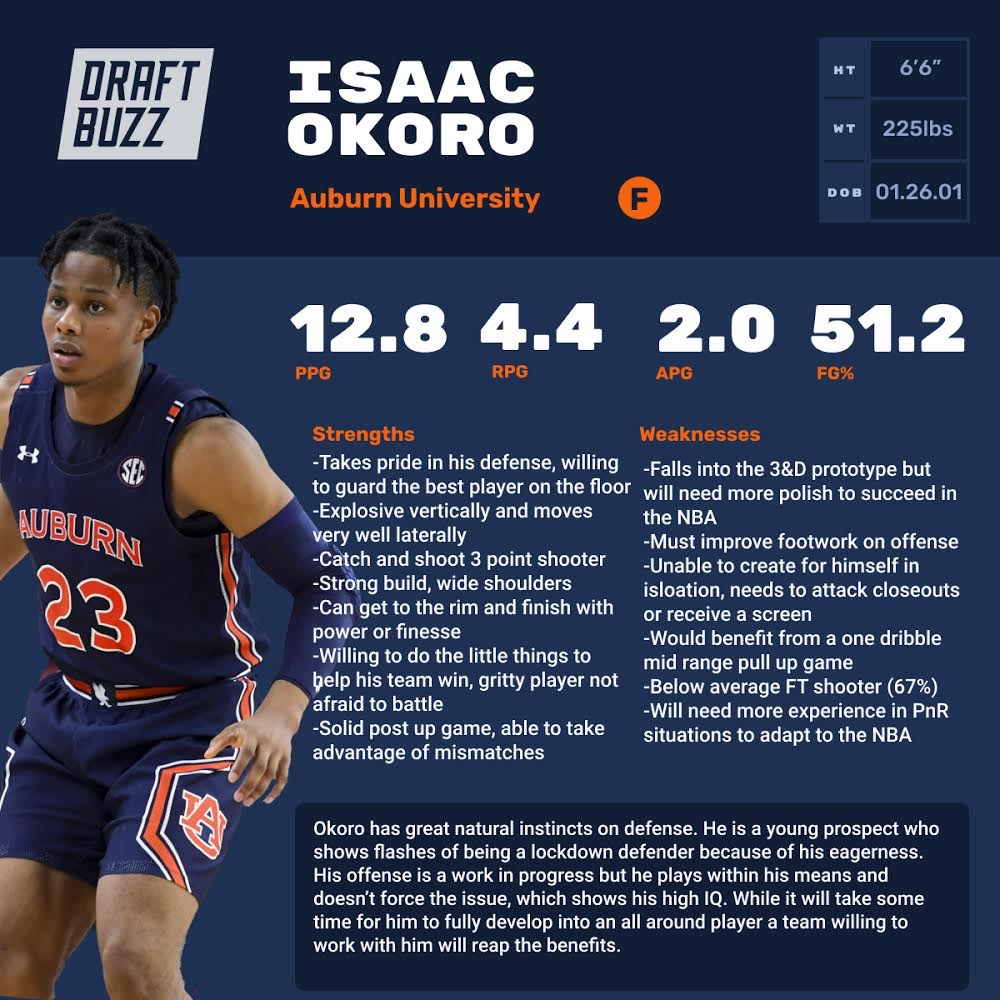