Hayes has been playing at a high-level of professional basketball since 2017.  He made his debut in the French Jeep Elite League at the age of 17.  Now 19, he is coming off a solid season with ratiopharm Ulm, which competed in both the German BBL and EuroCup.  Hayes was a full-time starter, seeing action in a total of 33 games and playing 24.8 minutes per outing.  On the season, he averaged 11.6 points, 2.8 rebounds, 5.4 assists, and 1.5 steals, with shooting splits of .482/.294/.876.  He also had an A/T ratio of 1.68 and a PER of 16.5, both of which were very respectable numbers for his age and the level of competition.

Hayes has very good size for a point guard, though he would benefit from some weight redistribution by adding muscle.  He is also a solid athlete in terms of speed and quickness, and he can create his own shots with crafty dribble moves and changes in pace.  The lefty also makes great use of screens with the ball in his hands.  Hayes is foremost a playmaker, who has a high basketball IQ and excellent vision, seeing plays before they happen, and finding creative ways to facilitate.  Among international players this season, he ranked at the 91st percentile for combined assists and points per possession (PPP).

Offensively, 42 percent of Hayes’ offense this season came from executing the pick and roll, and in terms of PPP (including the results of passes), he ranked at the 72nd percentile among international players.  The majority of the rest of his offense (39 percent) was split between transition, isolation, and spot-up possessions, and in terms of PPP (passes not included), he ranked above the 76th percentile, with the exception of spot-ups (20th percentile).

Hayes has two significant concerns as an offensive player, with shooting topping the list.  The 19-year-old is very effective taking step-backs and other jumpers off the bounce, ranking at the 77th percentile for PPP this season, and he was also solid with floaters/runners in the lane (51st percentile).  However, the youngster ranked at the 12th percentile on catch-and-shoot jumpers, and he made less than 30 percent of his threes for the second straight season.  The problem is that his shooting form is not consistent — he pushes some shots, and has a lot of unnecessary movement in his lower body (hips and legs).  His shooting flaws are more apparent when he is not shooting off the bounce, and increasing his strength may be one of the keys to fixing his jumper.

The other issue is that Hayes must improve with his off-hand (right) in terms of drive direction, finishing, and passing.  He is fairly predictable right now, often driving left and passing to his right; he actually totally surprises some defenders when he goes right.  He can whip difficult cross-court, one-hand passes on the move to his right with his left hand, but doesn’t display the same ability with his right hand.  The lack of balance in his approach leads to turnovers (3.2 per game) and limits his ability to attack the rim and finish.  Hayes also can struggle against double teams and aggressive on-ball defense, and his handle can be loose at times, especially when crossing over in tight spaces.

Defensively, Hayes is active and engaged.  He has quick feet, and works hard to stay in front of his man.  As a team defender, Hayes is energetic and alert, typically staying aware of both ball and man, and rotating in a timely fashion.  He needs to improve on dealing with screens, and playing tighter on shooters.  As on offense, Hayes anticipates well on defense and can be disruptive.  Alertness and quick hands help him rack up steals, but he reaches too much when beat off the dribble, picking up unnecessary fouls.  He also doesn’t offer much in terms of blocks (0.3 per game) and rebounds.

Hayes will almost certainly be a lottery selection, going anywhere between picks four and 14.  How well he does as an NBA player will be determined by the development of his shooting, right hand, and strength. 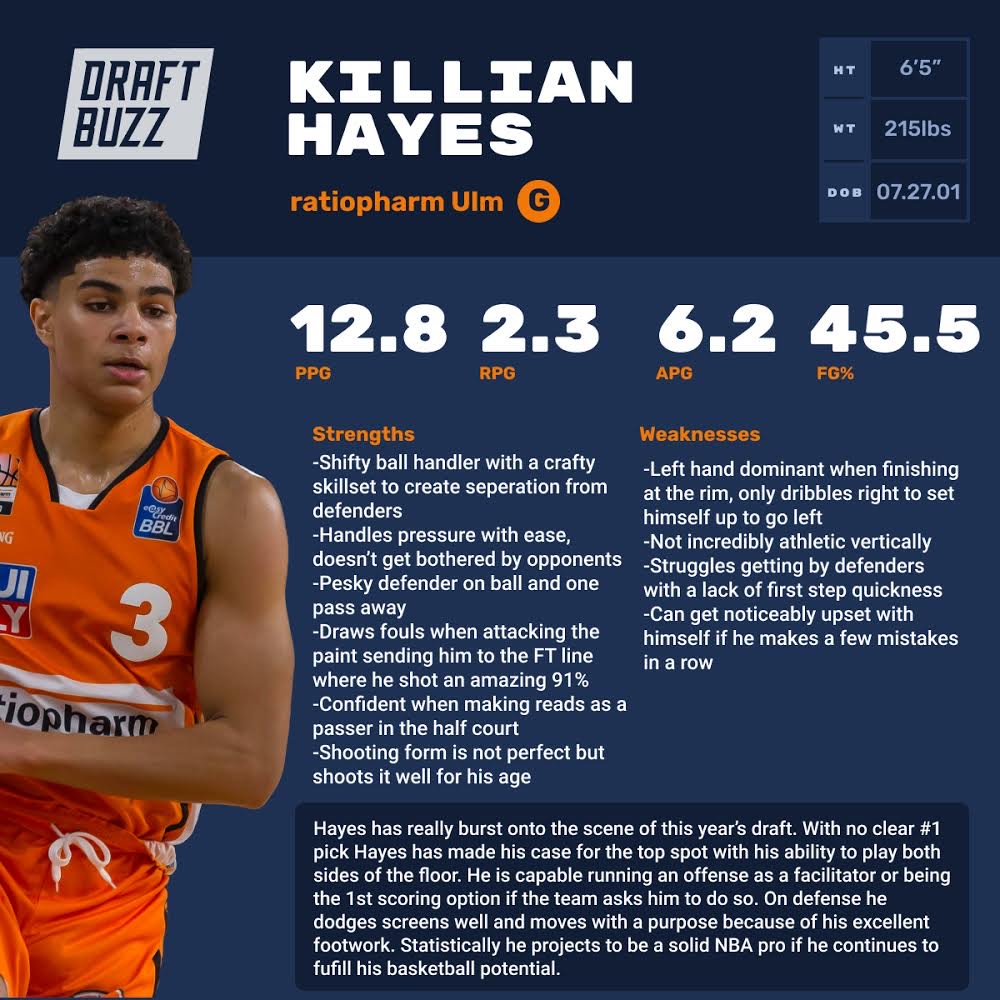