Avdija is one of the more versatile players in the 2020 draft class — he can do a little bit of everything, and he is a proven winner, helping Maccabi Tel Aviv win a championship in Israeli BSL this summer.  He has size, is solidly built, and is a competitive athlete, with lots of skill and a high basketball IQ.  He can play at either forward spot, and can be used in a variety of ways: spot-up shooter, cutter, point forward, and post scorer.  Having good speed and quickness with the ball in his hands for his size, he can be effective off the bounce.  The 19-year-old Israeli also has very good vision, is a nifty passer, and can play on either end of the pick and roll, as a handler or roller/popper.  His biggest weakness is his off (left) hand, which hinders his ability to create shots and to finish around the basket at times.

Playing against tough competition this season in both EuroLeague and the Israeli BSL, Avdija played 21.7 minutes per game, averaging 9.0 points, 4.7 rebounds, 2.0 assists, and 1.3 combined steals and blocks.  His per-game numbers were not overly impressive due to the limited minutes, but his shooting splits (.505/.333/.588), PER (15.2), and assist-turnover ratio (1.27) were very respectable, especially when considering the level of competition.  Avdija also ranked at the 66th percentile for combined assists and points per possession (PPP) among international players.

Avdija posted better numbers in the IBSL, and he showed improvement as the season progressed.  He averaged 12.9 points, 6.3 boards, 2.7 assists, and 1.9 combined steals and blocks per game, with shooting splits of .526/.353/.594.  He not only won a league title, but was also named the IBSL MVP.

In both leagues combined, about a third of Avdija’s possessions came via spot-up plays, and he ranked at the 50th percentile for PPP.  More than half (56 percent) of his half-court shots were jumpers, and the majority of those were unguarded catch-and-shoot attempts (51st percentile).  He fared worse on guarded catch-and-shoot (31st percentile) and off-the-dribble jumpers (22nd percentile).  These shooting numbers may not look impressive, but we have to remember that they came against high-level pros.  The 19-year-old’s mechanics look solid, he’s smooth on pull-ups, and his height helps him easily get off his shots.  His free-throw stroke also appears to be solid, but he has made just 56 percent of his attempts as a pro.  I specifically asked him about his free-throw woes as a pro during the NBA Combine media sessions, and the youngster said that he believes that his free-throw struggles are mental, and he vowed to improve.

On the other end of the court, the news is mostly positive.  As on offense, Avdija has versatility, and is capable defending inside and out (2 through 4).  He posted a standard defensive rating of 95.6, which was the eighth best in the IBSL this season.  He also ranked at the 60th percentile for PPP allowed among international players, and the only subcategory where he didn’t rank at least average was as a spot-up defender (39th percentile).  Avdija moves well laterally, and does a nice job of getting through picks and holding his ground in the post.  He can be a tad slow to react and rotate as a help defender, lacking some awareness.  He generally closes out in a timely fashion, but shooters have success against him because he does not have elite length and vertical explosiveness to effectively hinder and block shots (1.0 per game).  He also plays with good energy and effort; however, he could improve his conditioning because there are times when he runs out of gas and his defense suffers.

Overall, there is little doubt that Avdija will be a lottery prospect, and he should have a solid NBA career.  A number of rumors have linked him to the Golden State Warriors and the No. 2 overall selection.  Personally, I think that would be a little high, and believe that it’s much more likely that he will be selected somewhere between fourth and seventh. 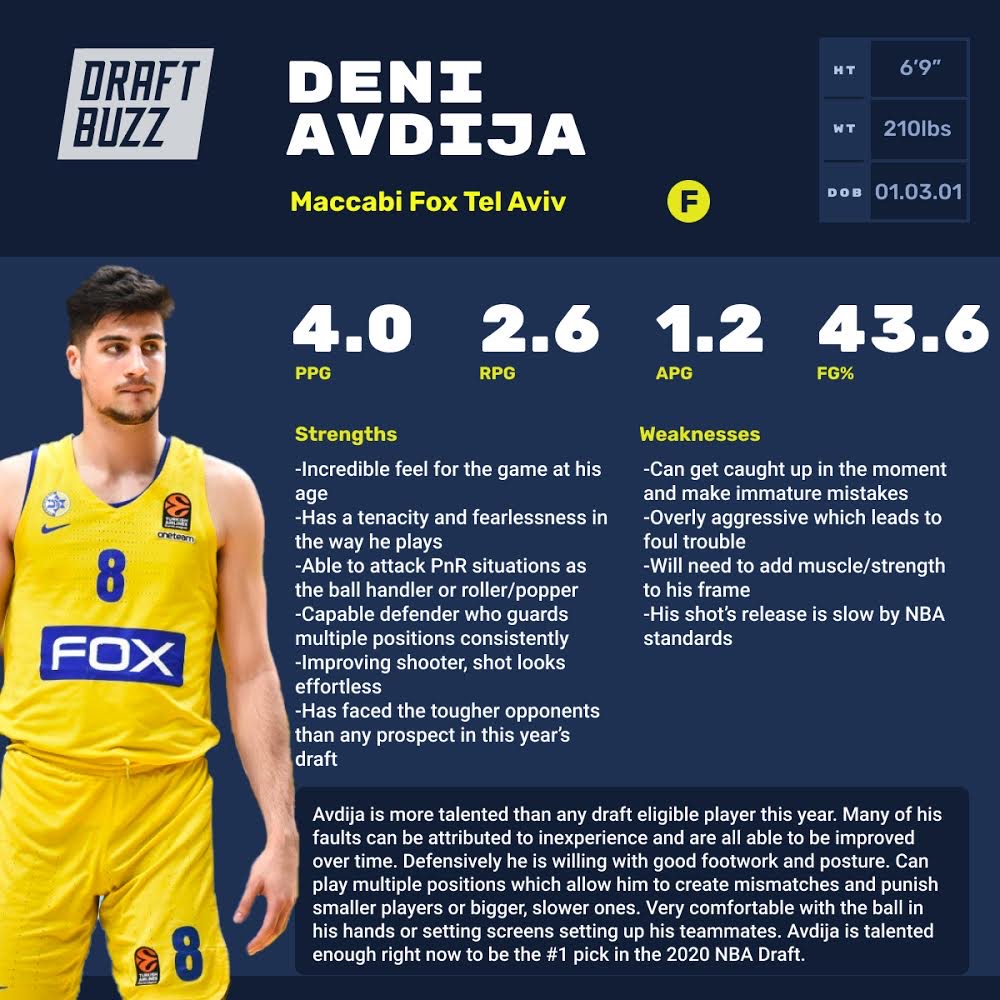