After a spectacular freshman campaign playing for Andy Enfeild at the University of Southern California, Onekya Okongwu is slated to be selected in the top 10 of this week’s NBA Draft.

Okongwu outperformed expectations in his first year at USC. The powerful post-player poured in 16.2 points per game and corralled 8.6 rebounds per game. He established himself as one of the premier “bigs” in the country, leading the PAC-12 with a player efficiency rating of 31.2 and finishing third in true-shooting percentage (64.5).

Okongwu brings value on both ends. He flashed defensive switchability potential, and is already a fully formed elite rim protector, evidenced by him finishing second in the PAC-12 or block percentage (9.6) and blocks per game (2.7). The Los Angeles native pairs timing and raw athleticism to harass opponents hoping to score around the basket. In isolation situations, offensive players were enveloped by his overwhelming defensive presence and rendered ineffective, scoring only 0.429 points per possession (PPP), which ranked at the 89th percentile among Division I players. In the half-court, he also limited opponents to field-goal percentage of 40.3 around the basket, including post plays.

As you dig further into Okongwu’s advanced profile, an impressive picture presents itself. He excels as a post-up player, ranking in the 90th percentile on post-up plays (including passes), and scoring 1.174 PPP as a pick-and-roll option (78th percentile).

NBA organizations in need of a modern 4/5 are almost certainly considering adding Okungwu at the top of this draft. His high-end offensive efficiency, combined with his mobility, elite rim protection, and athletic upside, give him rare prospective value entering the NBA.

As with every prospect in the 2020 NBA draft, Okungwu has his deficiencies. He’s not yet a floor spacer, going only 1-of-4 from 3-point land at USC, and making just 29 percent of his jumpers between 12 and 21 feet (6-21). There are glimpses of hope for shooting development, however.  For example, he made 72 percent attempts from the free-throw line (103-163) this past season. The size of the sample of shooting from the field is small, and the jury is still out on the freshman’s ability to ever truly attract the attention of NBA defenders as a jump shooter. If he cannot evolve as a shot maker, this will limit his offensive upside and ultimate ceiling.

Okungwu has a “negative” assist-to-turnover ratio (0.54), but USC lacked great shooters and did not space the floor effectively.  Also, the 19-year-old played alongside 7-footer center Nick Rakocevic in the majority of the Trojans’ lineups. Those facts still do not erase the fact that the future lottery pick will need to improve as a facilitator from the high post and in the short roll.

Being billed as one of the premier defenders in this 2020 draft class is not an overstatement. Yet, there are some analytical areas in which Okongwu did not perform exceptionally. His overall defense came in at 0.873 PPP allowed (37th percentile).  When defending the pick and roll, he was especially vulnerable when screeners picked and popped, allowing 1.118 PPP (22nd percentile).

Okungwu’s physical profile is likely less of a concern in today’s “small ball” NBA, but it’s worth nothing that a fair share of 6’9 forwards have quickly cycled in and out of the NBA:  J.J. Hickson, Thomas Robinson, and Ekpe Udoh come to the top of my mind. Skill and mobility have been accentuated as necessary attributes in today’s modern NBA, and although Okungwu brings plenty of both, the context around his size is still valid. 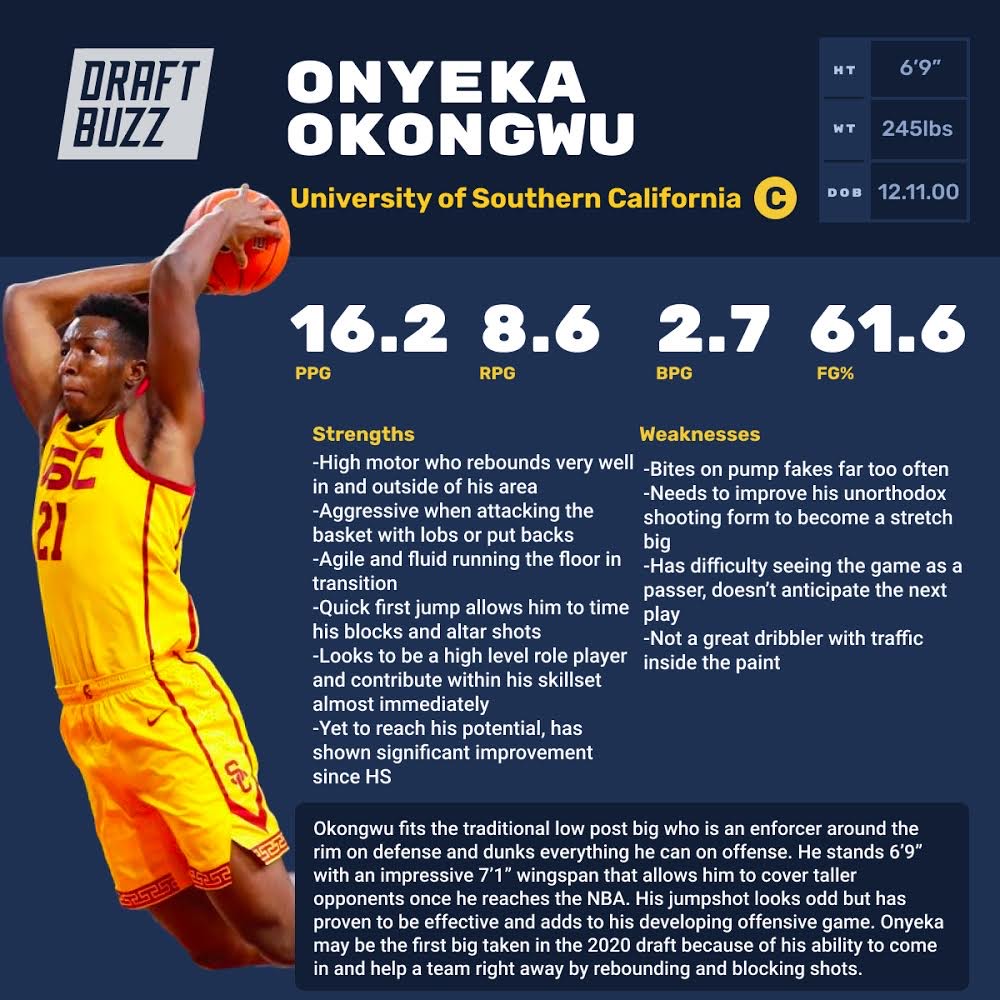 Sources, Credits, and Acknowledgements:  Stats used in our scouting reports mainly come from Synergy Sports Technology, RealGM.com, and Sports-Reference.com.  Other outside sources are noted with links to the source.