Hampton has been gaining momentum during the pre-draft process due to positive reports from workouts, and an impressive cast of current and former NBA players who have been helping him train.  The 19-year-old took a fairly unusual route to the draft, choosing the Australian NBL over college, and he was limited to 17 games due to injury.  Considering his youth and the level of competition, he played reasonably well.  Averaging 21.3 minutes per game, he produced 9.6 points, 3.9 rebounds, 2.4 assists, and 1.2 steals per outing, with shooting splits of .417/.294/.737 and an A/T ratio of 1.68.

Hampton is a slender combo guard, who definitely could use more muscle.  His most impressive aspects are his overall athleticism and his speed and fluidity with the ball in his hands.  Ja Morant, who trained with Hampton earlier this year, reportedly said that the draft prospect was one of the “fastest guards” that he had ever seen.  Indeed, Hampton is very fast up and down the court, and he is also quick off the floor, and explosive vertically.  He also plays under control, doesn’t force shots, and defers to the veterans on his team, as he should.

Hampton was at his best this past season when handling in the pick and roll, ranking at the 64th percentile for points per possession among international prospects.  The Texas native is clearly more effective as a driver and a playmaker than a shooter at this point of his career.  He has excellent acceleration, and is dangerous when changing speeds.  The 19-year-old also has good body control and is able to make tough finishes at the rim.  He can finish with either hand, and absorbs contact surprisingly well.  At the same time, Hampton displays solid vision and awareness, and often makes difficult passes on the move.

As a jump shooter, Hampton is smooth when pulling up, but he didn’t hit those shots with consistency in Australia.  Reports from his pre-draft workouts have been encouraging, however.  Hampton has been working with former NBA sharpshooter Mike Miller, who has helped the youngster tweak his shooting mechanics.

Hampton’s defense also needs to significantly improve, on and off the ball.  His attention and awareness are not the best, but at times, he shows great hustle.  His athleticism can be a huge asset — he tied for second in the NBL with a steal percentage of 2.6, thanks to his ability to flash into the passing lanes.  However, the youngster becomes unbalanced an inordinate number of times when defending, and he tends to get hung up on screens.  Overall, given his raw talent, he should eventually become an adequate defender at least, assuming that he adds more muscle and improves his fundamentals.

In sum, I am bullish on Hampton’s potential.  I believe he has a very good chance to be a lottery pick, and at a minimum, I think that he will be a solid NBA player. 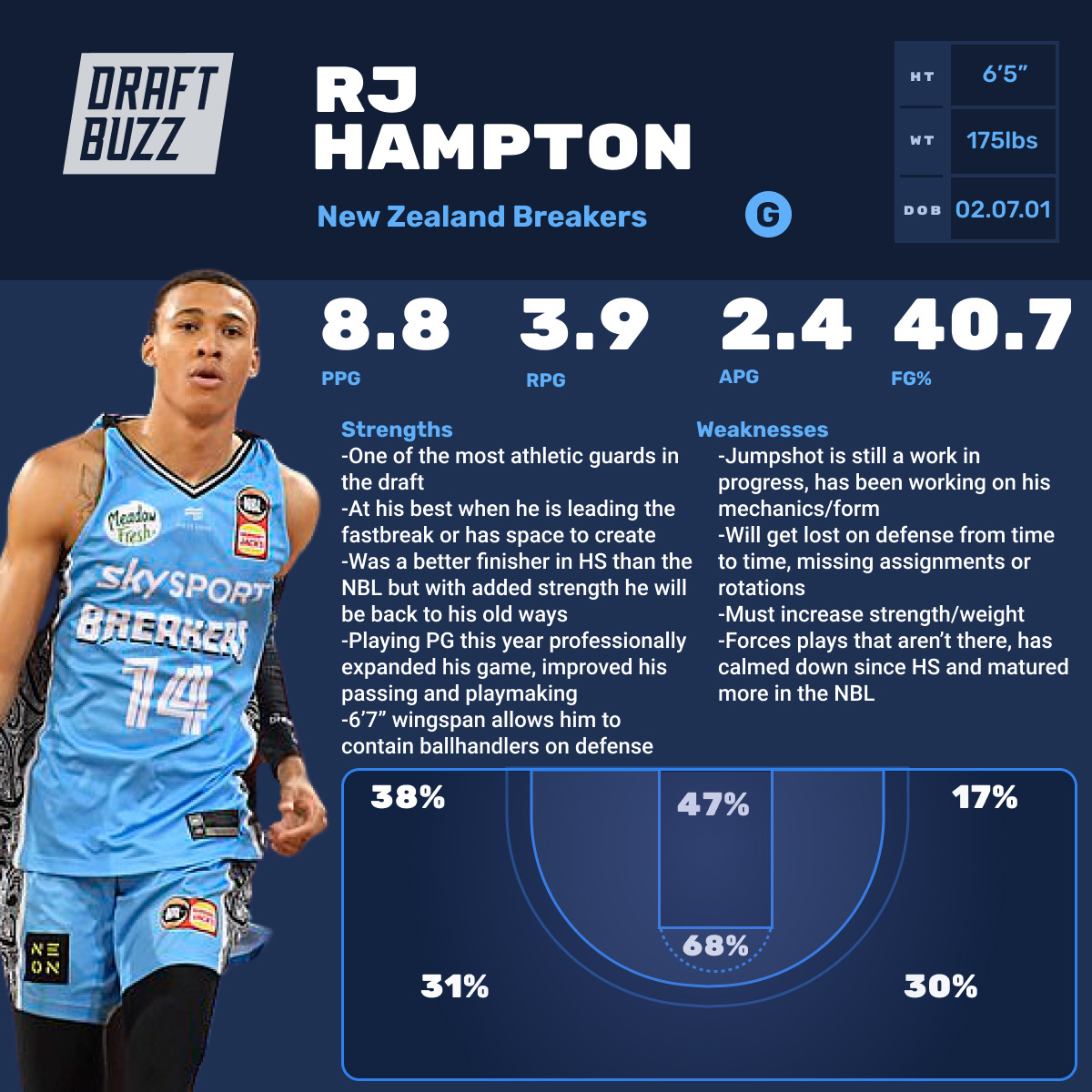